A Wasted First 100 Days – The More Things Change, The More They Stay the Same - Chase Independents Skip to main content

A Wasted First 100 Days – The More Things Change, The More They Stay the Same

A Wasted First 100 Days – The More Things Change, The More They Stay the Same

We all know that the first one hundred days of a new administration sets the tone, the pace and the agenda for what can be achieved in the year(s) ahead. The new Conservative administration might try and present a productive face but as you peel back the veneer there is no substance, no honesty and no new projects. 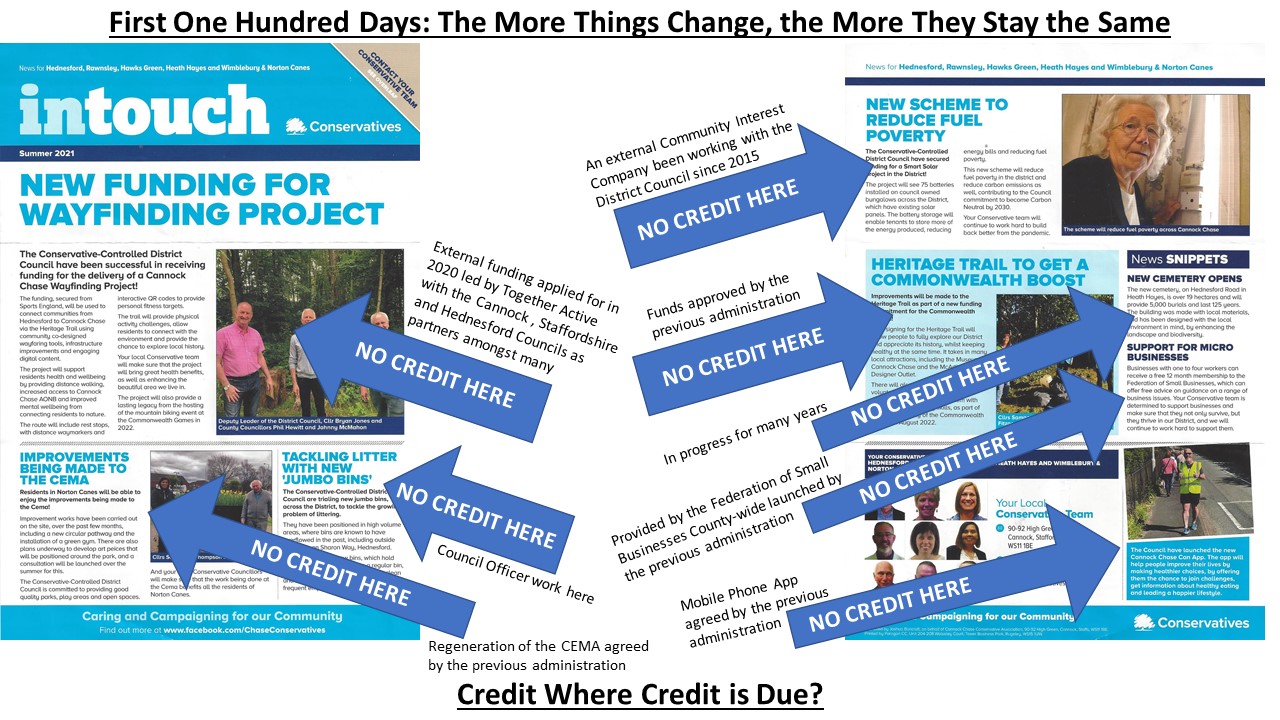 The supposedly flagship decisions over the first hundred days were each and every one already decided months ago by the previous Labour administration. When we look at the details of each of the decisions and press releases since May it reveals a dishonest pattern claiming credit for things they opposed before May and presenting as their solutions other things which were already moving forward. The reality is that regardless of which of the two big parties was running the council the same things would be happening at the same time in the same way Which is why we need an Independent Council focused purely on local priorities, contrast this with the energy, progress and effectiveness of an Independent administration of Hednesford Town Council – Chalk and Cheese – shows what can be done if you just get on with the job at hand.

Anyway, back to the discussion at hand, why do I highlight the ineffective Conservative administration? Well, the facts speak for themselves but only if you follow closely, which I appreciate many residents will not have the time to do so. Helpfully below is a catalogue of the issues for you to have full view of the facts.

I want to take a look at a couple of these in particular and why I have grouped them above. The first is the Discounted Car Parking in Cannock and Rugeley.

This follows a request by Rugeley Town Council at the beginning of the year to contribute an amount of money in return for free car parking. This became a manifesto pledge of the Conservatives in the election campaign misleading the community that free car parking was achievable, misleading the community of the policy position of the other council groups for both Chase Community Independents and separately Labour and misleading the community as to the status of the free parking in Hednesford. In the election campaign this was even to the point of having to retract/clarify/re-state the information they circulated in leaflets and/ or on their social media page.

In the meetings to decide in response to the request from Rugeley Town Council, the then Labour Cabinet Member suggested a scheme of subsidised parking where an amount would be reimbursed through local businesses. This was roundly criticised by the Conservatives in opposition, the decision of the previous Labour cabinet called-in, scrutinised and all Conservative Councillors on the committee voting against this type of scheme.

Roll forward three months and these same Conservative Councillors are now lauding the very same scheme as the saviour of the high streets in Rugeley and Cannock. Our position remains consistent when the original request from Rugeley Town Council was made, when the Labour suggested solution was put forward, when this was scrutinised and when the Conservative administration launched the Labour scheme as their own idea; the financial limitations of the District Council do not allow for free car parking, this would remove, around £800,000 of revenue which would need to be replaced as revenue from other charges or increases to Council Tax or cuts to services

A temporary scheme without robust measures, monitoring and any idea of outcomes was ill-thought-out, rushed and likely ineffective. Regeneration of our High Streets is, quite rightly, a key priority for the District Council as indeed it is at both Rugeley and Hednesford Town Councils and again the contrast in actions rather than words is marked where the Towns Councils are leading the work here whilst Cannock, in particular, which does not have a Town Council has been hollowed out by the Designer Outlet Village and no coherent, affordable plan or vision for the future.

The second “decision” to look at in a little more detail is the announcement that funding had been released for rebuilding the boardwalk in Rugeley and the footbridges in Rawnsley Woods and Anglesey Nature Reserve.

Again, this was a decision by the previous Labour administration under pressure from the Chase Community Independents and Green Group at the Council as part of the budget process back in February and a motion amendment brought forward by our group prior to this. Whilst it is fair to say that the Conservative Councillors in Rugeley highlighted the removal of the boardwalk and have been seeking its replacement for several years the decision to replace it this year was made before they formed an administration. To try and claim credit for this is at best disingenuous and most likely dishonest.

Whilst we welcome the action on this decision it is disappointing that the Conservative Cabinet wanted to keep the discussion a secret and away from public eyes at the last cabinet meeting.

Other examples of dishonesty, lethargy and a veneer coating of the facts are highlighted in exchanges of our role as the effective opposition on the Council over the past few weeks including the Leader making a statement in the Council Chamber that “Councillors had been consulted on the levelling up bid submitted to the government” this is categorically untrue and that was confirmed by the leader in an email to me where she stated it was being kept secret until it was approved or declined (although Councillors in other Councils have been informed as well as our MP, I also note that we were discouraged from a levelling up bid before the change of administration as the Conservative MP would not support a Labour bid for funds).

A recent cabinet paper published with a map of Hednesford eight years out of date, spotted by myself and when I queried the lack of engagement with Town and parish Councils the Cabinet Member querying, in an email to me, what I meant by being disappointed that there was yet again no liaison with Parish and Town Councils, clearly not understanding the difference between a superficial mandatory consultation with statutory bodies and co-design of a policy platform to deliver on tackling anti-social behaviour associated with alcohol consumption in open spaces.

Finally, as this is very anecdotal from an informal conversation with a Cabinet Member and County Councillor for more than four years not knowing about the location of the bridge in Anglesey Nature Reserve discussed above.

I highlight these in particular but I could go on with other examples. These each demonstrate a pattern of behaviour which we have seen from the Conservatives locally for some time where they claim the actions, initiatives and ideas of others as their own. Whether that is keeping “A Board” Charges off our High Streets, campaigning to maintain free access to Cannock Chase or community volunteering initiatives for litter picking or community speedwatch. I will caveat this by making clear that there are some Councillors whom I respect and like and clearly working hard for their communities however there is a political undercurrent from a number of Councillors where the greed of power is corrupting the work to improve our community for our residents.

This tendency towards misrepresentation and dishonest portrayal has been evident in subtle ways for a while now. Making unsubstantiated, false claims in election leaflets, bullying speeches in the Council Chamber, silence from their Leader in private meetings only to make prepared statements in public.

The contrast in the latter does lead to the question of who is actually leading the Council as the contributions and language being completely different in private to public. It is interesting to note the change of Deputy since forming the administration to who had the role in opposition. This is also seen through who speaks the most at Council meetings, particularly comments not prepared before the meeting, who attends the Leader duties with other organisations and where liaison and response is coming from when asking questions.

It was further disappointing to read a blog by the Conservative Leader of the Council published recently which is full of this self-aggrandising rhetoric claiming credit for an election victory locally which we all know had a national impact from the success of the NHS vaccine programme at that time and benefitted from the limitations imposed on local leaflets and newsletters earlier in the year where national postal campaigning was permitted by the Government. Indeed, all other political parties, candidates and the election officials all wanted elections to be delayed being held safely in the Autumn.

You might question if the result would have been the same with Covid infections and fatalities continuing at high rates, the vaccination programme stalling, the impacts of Brexit starting to become apparent with more job vacancies arising as EU workers not being available for work in the UK, empty food shelves, pressure on supply chains, a financial sector decamped to other parts of the world, the betrayal of the brave veterans who have fought for two decades in Afghanistan with those losing their lives, living with life-changing injuries either physically or mentally as we abandon a fragile part of the world and bring 20,000 Afghans to seek refuge in the UK at the head of the housing lists increasing the pressure on waiting lists for housing and the accompanying homelessness in our communities.

The Leader of the Council also makes many untrue, unfounded and outright falsehoods about us which is disappointing when it is evident to the whole community that we speak only for them and put so many hours in to our area, volunteering, supporting volunteers, individual casework and championing all kinds of causes alongside many fantastic residents and I guess that is the most disappointing aspect of all of this is that it insults the community and our collective efforts for a better future for us all.

It is notable that almost a third of the Conservative Councillors come from three families although not immediately apparent where married names are not used for Councillor duties in all cases. The concern about this lack of apparent transparency could lead to the corruption of cronyism and a lack of free discussion within even the group never mind across all Councillors. It is fair to observe that the relationships between Councillors in the Conservative group is not denied but an uninformed review of the Council website would not highlight this to the residents of Cannock Chase.

As I draw to a close, I am changing the title of the blog from A Wasted 100 Days to “The More Things Change, the More They Stay The Same” as a puppet leader locally oversees a dishonest, calculating and cronyism regime this will not bode well for our community which needs Councillors to work together with honesty, integrity and transparency unfortunately the actions and prejudices of this Conservative Administration do not reconcile with the expectations of working in Public Life, the so-called Nolan Principles of Selflessness, Integrity, Objectivity, Accountability, Openness, Honesty and Leadership.