Cannock Council AGM - What is it all about? 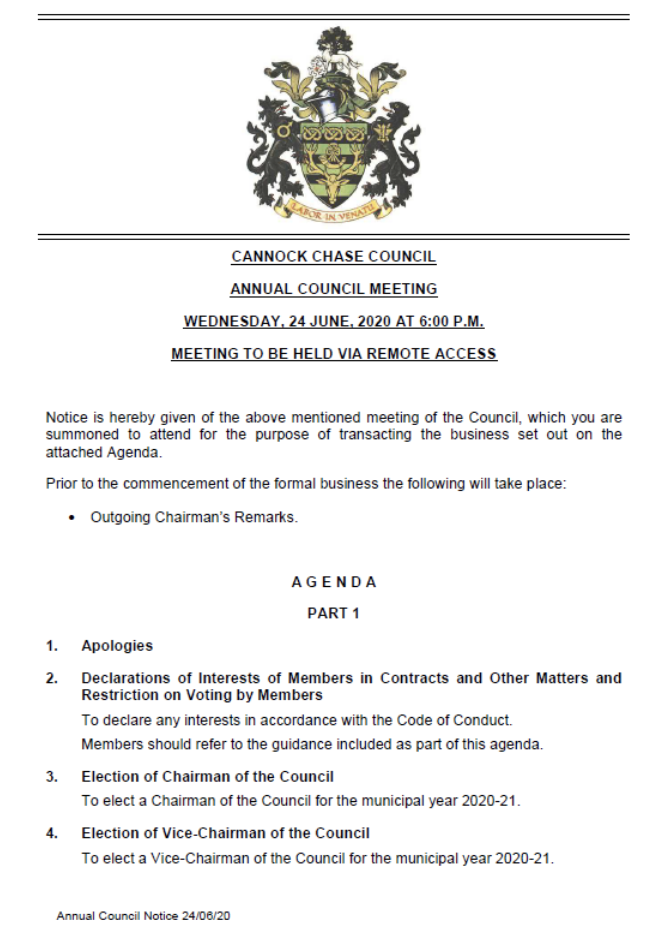 What is the AGM?

The AGM is the Annual General Meeting of the Council. It is a formal meeting held every May and is likely to be the first meeting a Councillor attends if they are elected in the usual cycle of elections. In 2020 the impact of the COVID-19 crisis meant elections were cancelled, and there are no new Councillors this year. In addition, the meeting is held in June and online rather than in person.

The meeting is open to the public and documents relevant to the meeting, referred to as “papers”, are issued online beforehand. Councillors are expected to have read and considered the contents of the papers before they arrive at the meeting.

The Chairman is supported in the meeting by the Council Managing Director, the Council Solicitor and someone from Democratic Services who will write the notes or minutes of the meeting. Other Council staff may attend depending on the agenda items being discussed.

Why is the AGM important?

The AGM is important because it agrees membership of the Cabinet, Shadow Cabinet, Committees and Sub-Committees for the year ahead and confirms the dates of Council meetings. It is a legal requirement to hold an AGM every year.

The AGM may also include other items of business for Councillors to consider.

What happens during the AGM?

Before the start of the formal meeting the Chairman for the previous year will make some remarks and comments about their year in office.

The AGM starts, as all meetings of the Council do, with recording apologies from those not able to go to the meeting. Councillors will also, where appropriate, make a “declaration of interest” in items on the agenda. This highlights that the Councillor has a personal interest in business of the Council, and the Councillor will not take part in any debate or vote on that business in order to prevent a conflict of interest.

The Council will elect a Chairman and a Vice Chairman of the Council for the year ahead. Nominations are received in advance and the election is made by a vote of Councillors during the meeting. The term “Chairman” is a legal one and applies to whomever holds the post, including women and non-binary gender Councillors.

The Council then moves to approve the minutes of the previous meeting. The minutes are the official record of each meeting, so it’s important that they are an accurate and factual summary of events.

The Chairman and Leader each share announcements they would like to make to the Council. They also summarise any letters or emails they have received which are of interest to the full Council.

Committees and sub-committees are formed to oversee specific areas of responsibility of the Council, for example Planning. When forming committees, efforts are made to ensure political balance, for example by not having a committee made up of people from only one group or party. As far as possible membership of committees should reflect the political balance of the Council. Councillors are provided details of proposed memberships of each committee, as well as nominations for the Chairmen and Vice Chairmen of committees, before the meeting.

The Council will then appoint representatives to 35 outside bodies working to benefit the District. Nominations will be sent to Councillors before the meeting.

The Council will then move on to other meeting business, which is not specific to the AGM

On this occasion these extra items of business include

The meeting is then officially closed.