My family and I moved to Rugeley in 2003. We had visited the town on a regular basis for a couple of years and loved the fact that here we had a vibrant small town with Cannock Chase, in our case literally, on our doorstep.

Rugeley has a history as a small market town. With the arrival of the mines it became a small industrial town and many of its residents are second or third generation townsfolk who are proud of “their town”.

And why shouldn’t they be?

But Rugeley has declined in the relatively few years we have been here, as with most town centres it has never recovered from the loss of well-known shops during and after the last financial crisis in 2008 / 9, the rise in on-line shopping and the perceived lack of investment by the District Council.

But you only have to walk through the centre on a busy Saturday to sense the air of community with locals standing passing the time of day. Something you don't see in larger towns anymore.

Rugeley also has other attractions 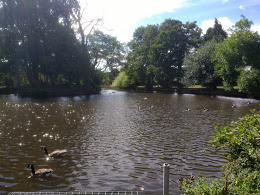 Apart from the obvious Cannock Chase we have two nice parks in Ravenhill and Elmore Park, Anglesey Nature Reserve nearby, the Heritage Trail linking to local towns, a theatre, the Concerts on the Chase, the planned Fringe Festival and a Town centre with some great historic architecture.

Believe it or not Rugeley has 30 buildings or structures which are recorded in the National Heritage List for England, such as The Red Lion Inn, which dates from c1600, Rummagers in Lower Brook Street and the Remains of Old St Augustine's Church.

You can find more information on the following two sites: -
https://en.wikipedia.org/wiki/Listed_buildings_in_Rugeley
https://britishlistedbuildings.co.uk/england/rugeley-cannock-chase-staffordshire

We also had a resident, notable for the wrong reasons in Dr Palmer or Palmer the Poisoner who was convicted of the murder of a friend but was also suspected of poisoning his brother, his mother in law and four of his children.

More information can be found on the following two sites: -
https://en.wikipedia.org/wiki/William_Palmer_(murderer)
http://staffscc.net/wppalmer/

The layout, the architecture, the history, the facilities on our doorstep mean that Rugeley is an ideal position to reinvent itself into a bustling, historic, cultural centre and tourist spot as Towns seek to reinvent themselves post COVID 19.

Do you share Ian's love of Rugeley? Let us know your favourite spot in the comments section